PrimerStation is a web service to calculate optimal primer sets that are guaranteed high specificity against whole human genome.

To achieve high accuracy, we used hybridization ratio of primers in the liquid solution. Calculating the status of the sequence hybridization in terms of stringent hybridization ratio is computational costly, there was no web service that checks whole human genome and returns highly specific primer set which calculated by the precise physicochemical model.

To shorten the response time, we precomputed the candidates of the specific primers by using a massively parallel computer with 100 CPUs (SunFire 15K) for about 2 months in advance. This enables PrimerStation to search and output the qualified primers interactively.

PrimerStation has a capability of selecting highly specific primers suitable for multiplex PCR by seeking optimal temperature range that minimizes the possibility of cross-reaction. It also allows users to add some heuristic rules in the primer design, e.g., exclusion of SNPs in primers and avoidance of poly-A and CA-repeats in PCR products.

We performed substantial tests that verified the PCR amplification of randomly selected primers for ChrX, and we confirmed that the primers perfectly magnify specific PCR products. The details of the method will be reported elsewhere. We believe PrimerStation must be beneficial to a wide range of biologists and medical scientists.


The input example to design five multiplex genomic PCR primers for three different products on the identical region of mRNA with NM_003380 and two distinct amplicons on the same chromosomal region on chromosome 20 range from 180000 to 190000.


The input example to design three primer pairs on the first, second, and eighth exons of the same region with NM_003380. You can specify the three regions by using comma delimited expression.

In PrimerStation, you can design primers with various parameters including the range of product size, the minimum product size difference for multiplex primers, cation concentration, primer concentration, whether you need to avoid designing primers with known SNPs, undesirable secondary structures, PCR product with (A)n or (CA)n repeats.

If you design primers on SNPs, the primers may not amplify the target sequence perfectly. PrimerStation can avoid the potential failure of the hybridization exerting the best efforts. By checking the check box, PrimerStation avoid designing primers with known SNPs. The SNP information is retrieved from dbSNP (http://www.ncbi.nlm.nih.gov/projects/SNP/).

PolyA ,polyT, (CA)n or (GT)n repeats in the PCR products trigger slippage of amplification which is the cause of unintended size of products. To avoid such slippage, you need to avoid designing primers which amplify products with polyA, polyT, (CA)n, (GT)n repeats by checking checkbox of each corresponding option.

The result of primer design is shown as following figure. 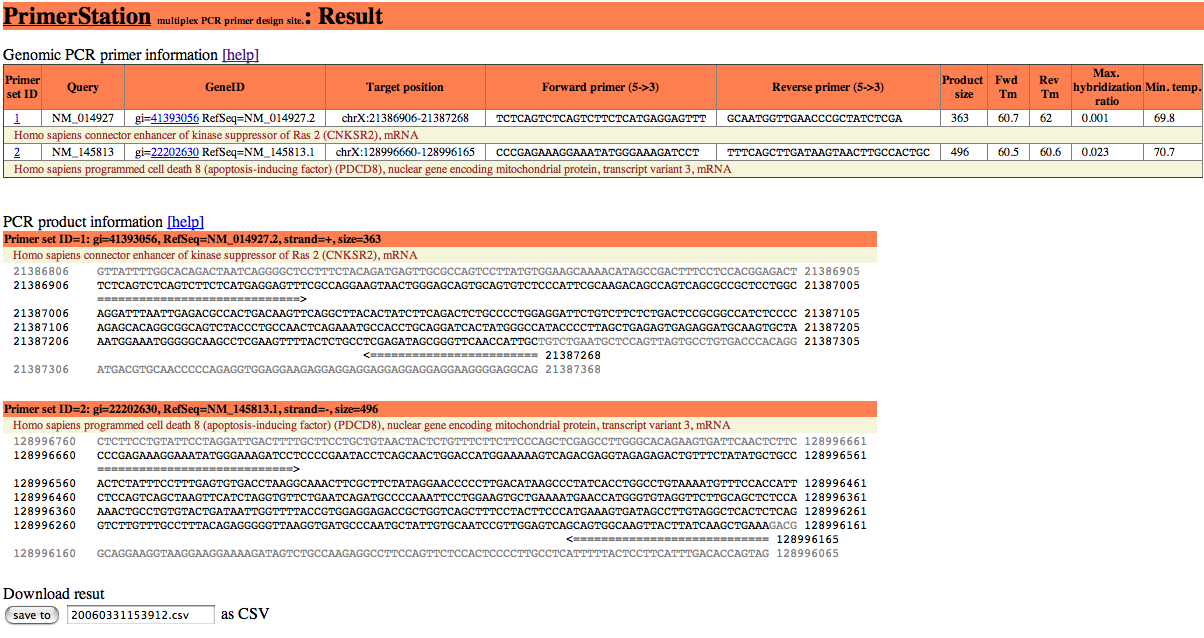 The result is shown in two separated sections. The first section indicates the primer information and the second section is the product information. The results can be downloaded as in CSV file format

The detail description for the primer information is as follows:

You can download the result for your design in csv (comma sepalated values) format. The csv file can be read by Microsoft Excel.

All accesses to PrimerStation are saved and processed to take out statistics of accesses, query patterns, and heavy users. Information provided by users would be used to enhance the function of PrimerStation. Frequent accesses from unresolved IP addreses or proxy server can be set as the object of refusal.

This work was supported in part by a Grant-in-Aid for Scientific Research on Priority Areas (C) and the Leading Project for Biosimulation from the Ministry of Education, Culture, Sports, Science and Technology of Japan, and a joint research project with SONY Corporation. Computational time was provided by the Super Computer System, Human Genome Center, Institute of Medical Science and the University of Tokyo.